I accept
Order a quote

Years of experience and commitment to our business have resulted in the MAGTRANS Group receiving numerous awards, distinctions and certificates related to, among others, the quality management system and freight forwarding activities.

Most important awards and distinctions 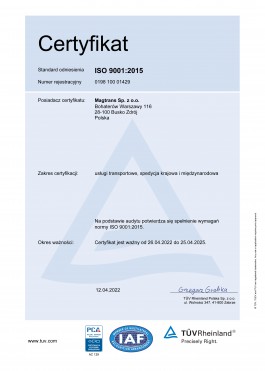 The independent, accredited certification body TUV Rheinland Polska Sp. z o.o. recognized the management system of Magtrans Sp. z o.o. as compliant with the requirements of ISO 9001:20015. The certificate confirms that our company provides only the highest quality of services for you. 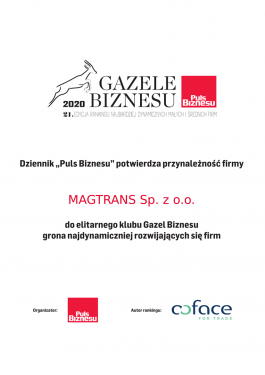 Over the last few years, the MAGTRANS Group has been among the most dynamically developing companies in the Świętokrzyskie region eight times, receiving the "Business Gazelle" - a distinction in the ranking of the Puls Biznesu daily. 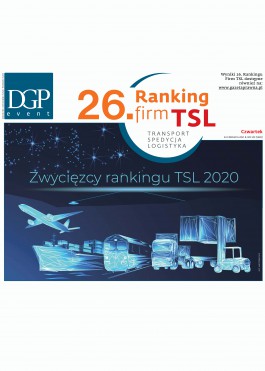 In 2021, in the 26th ranking of TSL companies published by Dziennik Gazeta Prawna, we were ranked as high as 12th among companies whose main activity is road transport and 16th in the ranking of the most dynamically developing TSL companies in Poland. 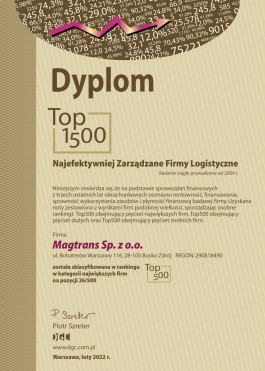 A DIPLOMA for Top 1500 Most Effectively Managed Logistics Companies
In the Top 500 ranking of the largest logistics companies, we ranked 26th/500. Conducted continuously since 2004, the survey assessed the company's profitability, financing, resource efficiency and liquidity. 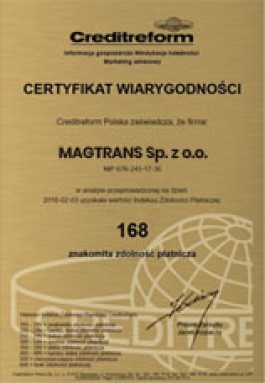 After an analysis conducted in September 2017, Creditreform Polska once again confirmed that MAGTRANS has good solvency. Creditreform Certificate is a document confirming payment reliability and creditworthiness. It is issued to companies that meet a number of requirements in terms of maintaining strictly defined values, economic indicators, as well as relations and structure of assets and capital. 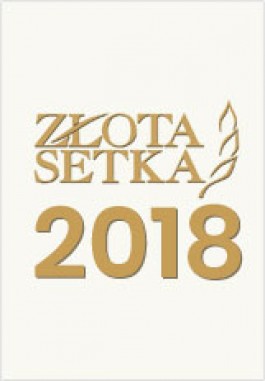 The Golden Hundred is a list of the 100 largest companies in terms of revenue generated by the Świętokrzyskie Province. We appeared in this ranking once again in 2018. 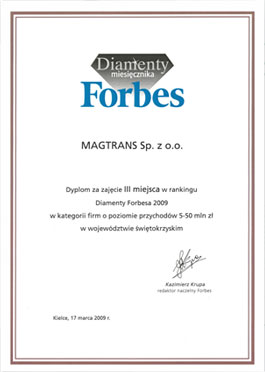 We were listed at the top of the Forbes Magazine's ranking of the fastest growing companies in terms of value in 2009 and 2016.

In December 2018, MAGTRANS received the TFC Elite Certificate, which is a distinction for the best forwarding companies. It is information to carriers and shippers that we have successfully passed the certification audit, taking into account all aspects of forwarding operations and objectively confirmed the high quality of our services.

Do you need more
information?

Write to us and we’ll reply as quickly as possible

The overriding goal of our operations is to ensure
customer satisfaction